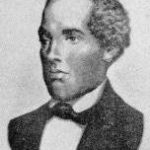 Second President of Liberia, Benson was born on May 21, 1816 in Cambridge,Maryland, USA to freeborn parents. Was six years old when the family immigrated to Liberia in 1822. He was taken captive in the Battle of Crown Hill, by the Dey and Gola people. Captors and six year-old prisoner bonded, and maintained life-long friendships after the captured children, at least ten in number, were returned to the American settlement, in a peace agreement mediated by King Sao of the Mandingos, and Captain Laing of the Royal Navy, from next door Sierra Leone.

A military shopkeeper for four years, he served as private secretary to Governor Thomas Buchanan and built a successful trading business,with several merchant ships. A delegate to the Colonial Council in 1842, he became a judge after independence in 1847, vice president to J.J. Roberts in 1853, and succeeded Roberts as president in 1856. Obtained recognition of Liberia’s sovereignty from Belgium in 1858, the USA in 1862, and Italy, Norway, Sweden and Haiti in 1863. Spoke several indigenous languages and sought cooperation with traditional leadership, in contrast to the isolationism and cultural arrogance of previous governments. Through treaty and purchase, he expanded Liberian territory to 600 miles of coastline. An ordained Methodist minister, the very popular Benson died on his coffee plantation in Grand Bassa County in 1865.