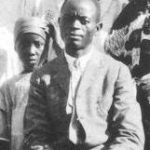 Pleyonnoh Gbe Wolo was born in Grandcess, Kru Coast Territory, now Grand Kru County, about the 1880s, the son of Paramount Chief Gbe. In 1899 he met a Methodist missionary, Rev. James B. Robertson, who was instrumental in getting Wolo enrolled at the Monrovia Seminary. He moved to the United States in 1910, again with the assistance of missionaries, and studied at Mt. Herman Boys School, earning a diploma in 1913, and a B.A from Harvard in 1917, where according to Charles S. Johnson, he had a distinguished and brilliant career.

He earned his Masters at Columbia University, and a Bachelor of Divinity degree from Union Theological Seminary in 1922. He returned home then, and became principal of a Methodist School in Grandcess that bore his name. He worked briefly for the Firestone Company, studied law and was admitted to the Bar in 1930, joining the legal staff of Firestone while serving as a senior Adviser to the CDB King administration.

He served as secretary to the League of Nations Commission of Inquiry and as Editor of the Liberian Sentinel. P.Gbe Wolo died in Monrovia on June 2, 1940.

From HISTORICAL DICTIONARY OF LIBERIA, Dunn, Beyan and Burrowes and STORY OF THE NEGRO REPUBLIC, Charles S. Johnson.