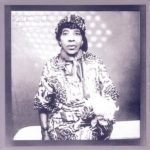 Loveable Liberian eccentric who conjures up a heavenly hash of Nina Simone and Lucia Pamela. Though not a politico by profession, the late “Ma Parker” served a term in Liberia’s House of Reps in the ’50s during the William V. S. Tubman administration. Musically, the dizzy yet dignified Parker mauled folk songs and addressed societal concerns with a freewheeling half-sung, half-narrated style, while pounding mercilessly on a grand piano. The album offers odes to bush cow milk and palm trees, along with not one but two diatribes against bloodsucking bugs. On “Cousin Mosquito #1,” Parker utters the word “cousin” 204 times in three and a half minutes. Madame had independent wealth, was by reports kind, generous and beloved, and was never without a bag of candy to bestow upon street urchins. She dressed flamboyantly, was renowned for an overload of cosmetics and sported a turban festooned with safety pins.