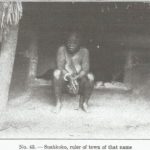 Madam Suakoko was born in the 1860s at a time when her parents resided in a small village known as Nyalensu, near present day Suakoko. Her mother came from Gboryorkweler and the father was a native of Kiayea. She was given the name Koko at birth and acquired the added name of Sua after graduating from the Sande school.

Sua grew up in Kiayea, today a part of Suakoko District. She spent some of her youthful years living with her maternal grandparents in Gboryorkweler near the village of Galai. Sua was a remarkable person as her compatriots acknowledged her ability to unite people. She is said to have played major roles in organizations and often brought order to chaotic situations.

Sua mastered the arts and traditions of her people much faster than her peers. It is reported that she quickly learned to identify medicinal plants and the oral traditions from the leaders much quicker than others in her age group. Legend has it that she received her leadership skills from God. She was soon recognized as a “Zoe” in training amongst her peers.

When President Daniel E. Howard (1912-1920) appointed Madam Suakoko Clan Chief of Kiayea her first task was to unify the clan. This she did by asking her kinsmen in Galai and Balama to work with her in the administration of the region. Thus the villages of Balama and Galai became parts of Suakoko Clan. Among the many Africans who rendered far reaching assistance to Liberia in her penetration process-establishing effective control in what is today Bong, Lofa and Nimba Counties was Suakoko. The assistance provided included intelligence, logistics and hospitality. Through intelligence provided by Suakoko, Government forces knew the strength, troop movements, and strategies of the enemies, especially Jorquelleh which refused Government troops passage through her territory.

Madam Suakoko also provided the Liberian Commander Lt. Robert Alexander Harper with porters to convey arms and ammunition as well as the personal effects of Government soldiers. Finally, through the hospitality of Suakoko, Government troops were able to regain strength and energy lost during their long trek from Monrovia and continue their long march to the far regions of Lofa, Nimba and Grand Gedeh Counties.

In addition to her assistance on the military front, Madam Suakoko also contributed immensely to the establishment of three major institutions in her District. Her excellent negotiation skills resulted in the successful establishment of the Central Agricultural Research Institute (CARI), Phebe Hospital, and Cuttington University in the District. These institutions have greatly contributed to the living standards of Suakoko residents in particular and the nation of Liberia as a whole.

Madam Suakoko administered the region effectively and was a strong ally of the Liberian government in the interior, until her death in the early 1930’s.