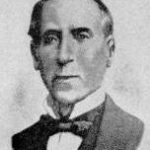 James Spriggs Payne served as the fourth and eighth President of Liberia from 1868 to 1870 and 1876 to 1878. He was the last President to belong to Liberia’s Republican Party.

Payne was born on December 19, 1819 in Richmond, Virginia to former slaves, and grew up in a highly religious Methodist family.

His father, David M. Payne, was a Methodist minister and was ordained as a deacon by the Virginia Conference in 1824. Payne was nearly white and could have passed for a white man; he was said to be only 1/8th African American. When he was ten years old, his family emigrated to Liberia on the ship Harriet. On the same ship was Joseph Jenkins Roberts, Liberia’s future first president.

Aside from religion, he showed interest in politics and economics, areas in which he later became a successful writer.

He was appointed by the Liberian government to work on finalizing the breakage of Liberia’s ties to the American Colonization Society.

During his presidency, Payne fought to end the slave trade existing on Liberia’s coast. He also improved government relations with indigenous nations, who he felt politics had for the most part ignored.

Early into Payne’s first term, Liberia sought to expand its trading and political ties to Europe.

Escalating economic difficulties began to weaken the state’s dominance over the coastal indigenous population. When the financially burdened ACS withdrew its support, conditions worsened as Liberia tried desperately to modernize its largely agricultural economy. The cost of imports was far greater than the income generated by exports of coffee, rice, palm oil, sugarcane, and timber. Payne increased the country’s foreign trade.

On leaving political office in 1878, Payne continued his life-long involvement in church work. In 1880, he was the Liberian delegate at the General Conference of the Methodist Episcopal Church in Cincinnati, Ohio, USA. The next year, he was elected president of the Methodist Annual Conference of Liberia. In January 1882, he was awarded an honorary doctor of divinity degree by Liberia College (now University of Liberia) for his life achievements.

Besides Payne’s descendants in Liberia the Krio branch of the Blyden family are descended from Payne through Anna Erskine, the partner of Edward Wilmot Blyden.