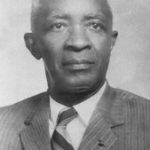 He trained as an account clerk at the Department of the Treasury and became a revenue agent stationed in Kakata. After working for the French company CFAO and then Raymond Concrete Pile as head Tally Clerk, he decided to pursue a career in the Law.

Pierre began his legal apprenticeship under the late Judge Summerville of Grand Bassa County and Chief Justice Louis Arthur Grimes. After undergoing the prescribed Bar Examinations conducted under the Chairmanship of Counselor B. G. Freeman, he was admitted to the Montserrado Bar as an Attorney-At-Law. Thereafter, he entered private law practice in association with Counselor Richard A. Henries, Sr., eventually becoming managing partner of the Henries Law Firm.

In January 1952, Pierre commenced a long and distinguished legal career in Government with his initial appointment as Defense Counsel for Montserrado County. Subsequent positions held include:

Finally on April 12, 1971, he was elevated to the position of Chief Justice of the Supreme Court of Liberia by President William V. S. Tubman. He held this position until the military coup d’état on April 12, 1980.

It is generally acknowledged that his years as Attorney General witnessed the high point of the Department of Justice because he was able to attract a high caliber of outstanding lawyers to work with him and to ably expand the duties and responsibilities of the Justice Department.

He placed particular emphasis on the establishment of a Codification Division within the Justice Department, and made the Solicitor General’s office an independent section with the authority to directly liaise with the various county attorneys to ensure the orderly and efficient prosecution of government cases.

From its inception, Attorney General Pierre was an early and enthusiastic supporter of the Codification Project, recognizing the vital and urgent need for the easy availability of research tools, including both statutory and decisional laws. He can truly be said to be almost single handedly responsible for ensuring the continuous updating, printing and publication of the Liberian Law Reports. Sadly after his death, the program was discontinued with the concomitant loss to the Bench, the Bar, law scholars and students alike.

Recognizing that the legal profession had undergone vast, complex and technical changes and that there was therefore a corresponding need for an academically trained and qualified body of competent Liberian lawyers, able to interact and compete with their foreign colleagues, Chief Justice Pierre concluded that the apprenticeship system of training Liberian lawyers, under which he himself was trained was anachronistic, outmoded and had outlived its usefulness. In spite of intense opposition, one of his first acts as Chief Justice was to successfully appeal to the Legislature to abolish the apprenticeship system. Accordingly, in 1972 the Legislature amended the New Judiciary Law by adding thereto Section 17.9 which requires as a qualification for membership in the Liberian Bar that all applicants must have obtained a law degree from the Louis Arthur Grimes School of Law or from a recognized foreign law school.

With this legislation, one of the traditional privileges and prerequisites of prior Chief Justices was abolished. Prior to the enactment it was the unilateral right of the Chief Justice to instruct Circuit Court judges by mandate to admit any applicant to the Bar. As a necessary adjunct and to ensure the continuous supply of a body of academically trained and competent young lawyers, he was an avid supporter of the Louis Arthur Grimes Law School of the University of Liberia. He initiated the Clerkship program under which third year honor students were selected to clerk for justices of the Supreme Court.

In an attempt to upgrade judicial appointments, Chief Justice Pierre in conjunction with the Bar, created a screening committee to submit names to the President to fill judicial vacancies. This committee was named the Brownell Committee in honor of its first chairman, and the oldest practicing counselor of the Supreme Court Bar, Counselor (former Attorney General) Nete Sie Brownell. The work and effectiveness of the committee were reflected in the high caliber of subsequent judicial appointments.

He made strenuous efforts to improve the Liberian Judiciary by initiating yearly judicial seminars. His attempts were not limited to the national level, and during his incumbency, he ensured that both the Bench and the Bar actively participated in both regional and international judicial conferences. In 1971, he was one of only six Chief Justices world wide selected to be judges at a demonstration trial of an international court of justice organized by the Fifth Conference on World Peace through Law at the Third World Assembly of Judges held in Belgrade, Yugoslavia. The relevant case facts and the opinion submitted by Chief Justice Pierre on behalf of the Republic of Liberia can be found in 20 Liberian Law Reports at pages 771-796.

In 1971, he hosted a judicial conference of West African Anglophone Chief Justices in Monrovia. One of the recommendations of the conference was the establishment of an ECOWAS West African Court of Justice to adjudicate regional disputes and this has now been implemented and the ECOWAS Court established.
In January 2008, the Supreme Court of Liberia established the James A. A. Pierre Judicial Institute with the goal of enhancing the legal system in Liberia by providing proper training to all judicial officers and court staff.[1] In June 2008 President Ellen Johnson Sirleaf launched the Institute at a ceremony held at the Temple of Justice in Monrovia.[2]

HPSOL:
Chief Justice Pierre’s most momentous decision was on the case of the Progressive Alliance of Liberia versus the Government of Liberia. A lower court had ruled against PAL’s application to register as the Progressive Peoples Party, and the opposition group appealed to the Supreme Court. Pierre rendered the historic decision allowing the PPP to register in January, 1980.

Three months later, the PPP leaders were arrested and charged with sedition after calling for the resignation of the government. While they were being held awaiting trial, rank and file soldiers staged a coup d’etat, assassinated the President and arrested all senior officials of government, including the Chief Justice. They were tried without counsel before a military tribunal, condemned to death, and executed by firing squad on April 22, 1980.