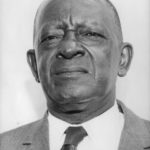 Melton was one of the movers and shakers in the William V.S. Tubman administration having served as Secretary of the Interior (now referred to as the Minister of Internal Affairs). Jake Melton, by all accounts as the Liberian Histories put it, was an organized minister, policy oriented member of the Liberian officialdom then, reconciler and a rural mobilizer.

Born in the Township of Caldwell in 1898 where his remains were buried, he was educated at the College of West Africa. Hon. Melton was a devout Christian. He was a staunch United Methodist and one of the pillars of the St. Mathews United Methodist Church in Upper Caldwell. Hon. Melton wedded Mrs Ellen A. Melton in 1927 and she died as a Centenarian in 2008.

After the resignation of the Secretary of Interior, Harrison W. Grisgby in 1959 to pursue his political interest in the Liberian Senate for his home-county, Sinoe, which he eventually won, President Tubman nominated Jake Melton as Acting Secretary of the Interior. Hon Melton had served the Interior Department in various capacities. Hon. Melton immediately undertook several reforms at the department of Interior. One of the reforms he recommended, according to President Tubman’s Annual Message to the National Legislature on December 22, 1959, was the harmonization of wages and compensations for all employees at the department and the hinterland. This was endorsed by the Government.

Some of his proposals accepted and immediately implemented by the Tubman’s administration were the establishments of Judicial circuit courts in all provinces now remodeled as Counties (now we have circuit courts in all counties); the building of provincial headquarters; the establishment of police detachments and land offices in all provinces. These proposals by Secretary Melton were effective means of decentralizing the Liberian Government.

Hon. Melton resolved several tribal disputes in the central, western and eastern provinces. This was a trend his successor, E. Jonathan Goodridge also followed to unify the interior.

Even though he is no more, but his reforms instituted at the department of interior still remain evergreen.