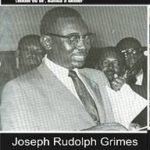 Longest serving Secretary of State, Grimes was born in Monrovia on October 31,1923 to Chief Justice Louis Arthur Grimes and Victoria Grimes. Educated at the College of West Africa, Liberia College, Harvard Law School and Columbia University. Founded Louis Arthur Grimes Law School at the University of Liberia in 1951 and served as its first Dean. Appointed Acting Secretary of State in 1958, and Secretary of State in 1960. Was instrumental in the formation of the OAU, the resolution of regional African disputes, (Congo, Biafra) and Liberia’s active role in anti-colonization efforts and African solidarity. Grimes died on September 7, 2007 in Guttenberg, New Jersey at 73.

Source: The Liberian Observer, Sep 11, 2007
MONROVIA, Joseph Rudolph Grimes, Liberia’s longest serving Secretary of State, who played a leading roles in the formation of the Organization of African Unity and in African Affairs at the United Nations throughout the 1960s, died on Friday, September 7, 2007 at his home in Gutenburg, New Jersey. He was in his 84th year. Mr. Grimes and his wife of 53 years, Mrs. Doris Duncan Grimes, were having a conversation at their home when he peacefully slipped away, in humble answer to his eternal summons.

A product of the College of West Africa (CWA), Liberia College (now University of Liberia), Harvard Law School in Cambridge, Massachusetts and Columbia University, New York City, where he took the Master’s degree in International Affairs, Mr. Grimes returned home in the early 1950s and was appointed Counselor of the State Department (now Ministry of Foreign Affairs).

Following President Tubman’s death in July 1971, Mr. Grimes continued as Secretary of State until December of that year, when the new President of Liberia, William R. Tolbert, Jr., appointed Mr. Grimes’ classmate, Rocheforte L. Weeks, then president of the University of Liberia, to succeed Mr. Grimes. Dr. Weeks thus became the last Secretary of State and in early 1972, when the nomenclature was changed, he became Liberia’s first Foreign Minister.

Ernest Eastman, who worked closely with Mr. Grimes in the State Department for over 15 years, told the Daily Observer that next to the Soviet Foreign Minister Andre Gromyko, Mr. Grimes was probably the world’s longest serving foreign minister.

Rudolph Grimes and Ernest Eastman worked very closely together on many issues, especially Liberia’s relations with the United Nations and African affairs. In 1957, shortly after he returned from Columbia University, where he also studied International Affairs, Ernest Eastman was appointed by President Tubman as Director of Afro-Asian Affairs in the State Department.

It was Mr. Grimes, then Under Secretary of State, and Eastman who helped President Tubman devote considerable time to African affairs. Both men, along with Ambassador Henry Ford Cooper, then Liberia’s most senior diplomat, accompanied the President to the Accra Conference of African Heads of State and Government in 1958.

According to Mr. Eastman, so convinced was President Tubman that he should take the responsibility to help unite the African nations and peoples that he did not mind being the only African president or head of government at the Accra Conference. The rest of the governments were represented by prime ministers and foreign ministers.

Mr. Eastman recalled that shortly following the Accra Conference, Ghana, under Prime Minister Nkrumah and President Ahmed Sekou Toure of the Republic of Guinea as well as Modibo Keita of Mali met in Cairo, Egypt to discuss African Unity. Said Mr. Eastman, “President became concerned about that meeting, and believed that should African Unity start on that tangent, it might be dangerous for the future. Tubman put this conviction in writing, in a letter to King Mohammed of Morocco, who promptly agreed with him.

But Tubman did not rest there.

The very next year, 1959, he invited Prime Minister Nkrumah and President Touré to the Sanniquellie Conference, held in Sanniquellie, then in the Central Province (now Nimba County). From that point on, the momentum toward African Unity had started in earnest. In 1961 President Tubman convened the Monrovia Conference, which was attended by most African Heads of State and Government, over 21 of them, including Prime Minister Tafewa Balewa of Nigeria and Prime Minister Nkrumah.

In the meantime, the Heads of State and Government put several committees together to lay the ground work for a formal organization uniting nations all of independent Africa. The nations of Southern African, especially Rhodesia (now Zimbabwe) and South Africa were still under racist colonial rule.

It was shortly following the Monrovia Conference that Secretary Grimes was appointed by the African leaders to be part of the core Committee to draft the Charter for the organization. It was Grimes’ draft that reached Addis Ababa and was approved on May 25, 1963, bringing into being the Organization of African Unity (OAU, now African Union).

The draft, written in Mr. Grimes’ own handwriting, was part of the invaluable collections in his personal library at his home on 10th Street, Sinkor, Monrovia, which was attacked in November 1985.

It was at that time that Head of State Samuel Doe sent soldiers to the Grimes’ home to attack him and his wife. Their home was burnt and the library destroyed, and Mrs. Grimes escaped through a window, falling several feet to the ground and sustaining slight injuries. Mr. Grimes, along with his sister, Dr. Mary Antoinette Sherman, were imprisoned. It was a heartrending experience for a man and his wife who had devoted their lives to building a good name in the comity of nations for their country; and their sister who had spent a lifetime educating her people.

According to Mr. Eastman, Secretary Grimes was for over a decade a towering figure in the Security Council, Assemblies, committee rooms and corridors of the United Nations. Because of his intelligence and his vast experience in international law, politics and diplomacy, and being the Foreign Minister of Africa’s oldest independent Republic, he was looked upon for leadership by all the other African Foreign Ministers.

Said Secretary Eastman, “We owe to Secretary of State Rudolph Grimes much of the credit for the major decisions taken at the United Nations concerning Africa in the 1960s. There were four leading African Ministers who represented the continent in the UN during that period, Eastman said. They were Secretary of State Grimes, Elias, the Attorney General of Nigeria, John Karifa Smart, Foreign Minister of Sierra Leone and Kojo Botsio of Ghana.”

Mr. Eastman continued, “After the Monrovia Conference, there was a strong movement among African leaders that Secretary of State J. Rudolph Grimes should be the one to be appointed the first Secretary General of the OAU. But Tubman turned it down. Then my name was proposed, but the Liberian leader declined that, too. President Tubman,” said Eastman, “was in many respects a very modest man. He did not want to be seen as pushing his own people into leadership positions in the young organization. But he readily accepted the nomination of Guinea’s Diallo Telli, who emerged as the OAU’s first Secretary General.”

Liberia’s current Foreign Minister, George W. Wallace, who worked closely with Mr. Grimes at the State Department from the early 1950s until Grimes’ retirement following President Tubman’s death in 1971, told the Daily Observer he (Wallace) was “deeply saddened at the passing of Secretary Grimes and I am sure the whole Liberian nation is equally saddened.

“My other regret besides Secretary Grimes’s passing,” said Minister Wallace, “was that he did not write the book he promised to write. All of us would have drunk from that great fountain of knowledge,” Wallace added.

Indeed, many Liberians looked forward to Mr. Grimes’ book. Had it been written, it would have been a great treasure to which students of African and world history, politics, international affairs and diplomacy would have referred for many generations.

Foreign Minister Wallace described Secretary Grimes as “a great, dedicated patriot of his country. He worked very hard for Liberia; put his heart into everything he did.

“In the church, Episcopal Diocese of Liberia, he rewrote the diocesan constitution and played a major role in the writing of the constitution of the Anglican Province of West Africa.

The Daily Observer called Mrs. Grimes in New Jersey to extend condolences and to request details of the passing and the funeral. She corrected part of the first version of her husband’s obituary, published on the newspaper’s website last Friday night, a few hours following his demise.

She and her husband had not sought exile in the United States, she explained. “I was already in the States on a visit, when in May, 1991 my husband flew to Zurich, Switzerland to attend a board meeting of the Monrovia Breweries. Following that meeting, he came to the USA to join me so that we would travel back to Liberia together. But when we got to the airport, Swiss Air told us that Roberts International Airport (RIA) had been closed, due to the civil war.”

The Grimeses therefore returned to the USA and have spent most of their time in New Jersey.

Joseph Rudolph Grimes was born on October 31, 1923, the scion of one of the country’s most distinguished families. His father, Louis Arthur Grimes, was an outstanding Liberian jurist and statesman, who served as Attorney General and Secretary of State. He succeeded Edwin Barclay as Secretary of State when Mr. Barclay ascended to the presidency following President C.D.B. King’s resignation over the Fernando Po crisis.

Dr. D. Elwood Dunn, a leading Liberian historian, said it was as Secretary of State that Louis Arthur Grimes really made his mark. Mr. Grimes represented Liberia at the League of Nations in Geneva in the early 1930s, when the whole debate over the mandating of Liberia under a sovereign power was raging.

It was Secretary of State Louis Arthur Grimes, assisted by President Barclay, who ably and brilliantly defended Liberia in this most serious of international controversies, and the country’s sovereignty was saved and sustained.

The League of Nations resulted from the 1918 Treaty of Versailles in Paris, France, that ended World War I. It was the forerunner to the United Nations Organization (founded in San Francisco, 1945 at the end of World War II).

It was that same League of Nations that in 1920, mandated the former German colony, Southwest Africa, and turned it over to the racist South African regime. The Southwest Africa People’s Organization (SWAPO, led by Sam Nujoma, had to fight a war to win back their country. The country won it’s independence in 1990 and became the Republic of Namibia.

President Barclay later appointed Mr. Grimes Chief Justice of the Supreme Court of Liberia, a position which he also held with distinction. It is after the former Chief Justice that the Louis Arthur Grimes School of Law is named.

Marbue, then a top student at the College of West Africa, died in the 1940s by drowning in the St. Paul River. Mr. Henry Grimes, one of Liberia’s first telecommunications engineers, and one of the founders of the Liberia Telecommunications Service (later Corporation), died in Liberia in 1990 during the civil war. Dr. Mary Antoinette Brown Sherman, died a few years ago in New Jersey. She was the first African woman to head a university, the University of Liberia.

Mrs. Grimes, Secretary Grimes’ widow, told the Daily Observer that plans for the funeral have not yet been finalized. Asked whether she had any thought of bringing the body home, she replied, “We have nothing left in Liberia. Our home was destroyed in 1985 and they have taken over our farm, which I worked so hard to develop.”