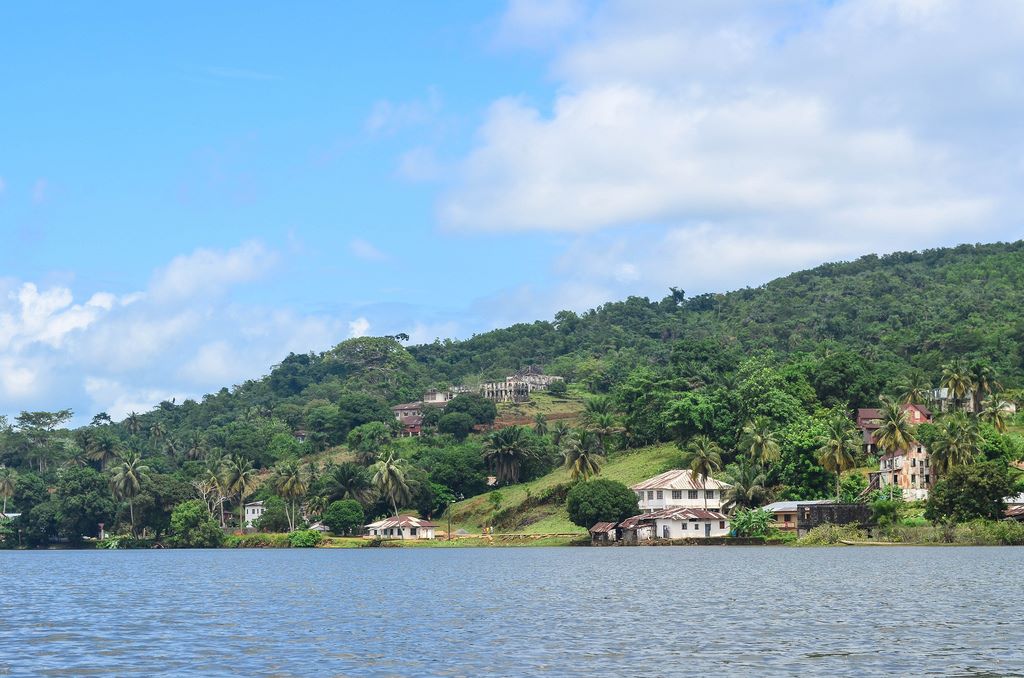 The lower portion of the Northwestern region is comprised of Grand Cape Mount, established in 1856, Gbarpolu County, and Bomi County, established in 2003 and 1983 respectively. Before 1924 when it became a county, Grand Cape Mount was administered as a territory within Montserrado County. The original inhabitants, the Dei, Gola, Vai, Mende and Mandingo, were joined in the late 1840s by African-American settlers who founded the town of Robertsport, named for Commonwealth Governor and founding President Joseph Jenkins Roberts.

The Vai were the biggest slave traders in the area and initially hostile to the 1822 American settlement at Duazeh, their name for Cape Mesurado. They attacked the small colony several times in concert with their Dei and Mamban client states surrounding the settlement, but were forced to back off by Mandingo King Sao Boso who insisted that they honor Dei King Peter’s (Zolu Doma) agreement with the ACS or lose their heads, literally. Conflict mediation was also assisted by Captain Laing of the Royal Navy in nearby Sierra Leone and an uneasy peace lasted until 1824, when elements of the Vai, Dei and Gola were engaged in a three way war. One of the Vai royal clans the Massaquois and King Peter sought alliances with the now stronger American settlement and mutual protection treaties were signed. The Liberians would from then on come to the aid of the Massaquois when they were attacked, and would also appeal to them for help in resolving conflicts with other local kingdoms. The Vai Town area of Bushrod Island ceased to be a slave trading depot, but their interior homeland of Cape Mount continued to flourish as a slave trading center, with the infamous Pedro Blanco and Theodore Canot operating openly. These troubles coupled with the Gallinas area border dispute with Great Britain would preclude the Liberian government from establishing jurisdiction over the Cape Mount area until the 1840s when under the dynamic leadership of JJ Roberts, treaties were signed with the local kings and the border dispute was settled. The Vais were thus the second indigenous group after the Bassa, to be fully incorporated into the Commonwealth and then the Republic of Liberia.

Thank you my fellow members of NACA for inviting me to share my thoughts, perspectives, and reflections on this the first commemoration of Founders’ Day by our organization.

Ladies and gentlemen, who are the founders of Cape Mount and what are we celebrating?

Let me first begin by sharing with you the descriptions that others have ascribed to this place that we attached to as our home county.

Writing in 1906, an English traveler, Sir Harry Hamilton described Cape Mount as “the most interesting and noteworthy feature on the coast of Liberia.” He said further, “Nothing can vie with Cape Mount, rising as it does more than 1000 feet straight up from the seacoast.” Sir Hamilton called Cape Mount, the “Gibraltar of Liberia.” He went on to write: “It is difficult to understand how such a splendid site at this mountainous peninsula, with its spacious lagoon on the east and half formed seaport on the west, did not tempt the nucleus of the American settlers to choose it for their future capital instead of the less attractive Cape Mesurado.”

Nearly 15 years later, Americans Reginald Charles and Fulke Maugham, wrote in 1920: “Cape Mount is surrounded on three sides by the sea; it is beautifully wooded right up to the summit, and its suave, swelling undulations, richly clothed in a covering of appropriate greenery, presenting a picture of refreshing coolness and repose, as it boldly raises its impressive head from the sweltering heat of the West African coastlands.” What a description!

Many of us are aware from learning history in elementary and high school in Liberia that in 1461, a Portuguese sailor named Pedro de Sintra, while exploring the West African coast reached what is now Liberia in the Fall of that year. We know that he named the place, “Cabo de Monte,” which was subsequently transliterated into “Cape Mount” in English.

We also learned that over 350 years later, Africans, who had been both slaves and free people in the United States settled in what is now Liberia, including at Cabo de Monte, and eventually declared a state, Liberia, in 1847. Our elementary and high school teachers taught us that Cape Mount was one of the original four subdivisions of Liberia at the time of the Declaration of Independence and the institution of the 1847 Constitution. We learned that Robertsport was named in honor of Liberia’s first president, J. J. Roberts. And some of us might have learned that Jehudi Ashmun first touched the soil of Liberia at Cape Mount, and later built a fort there to counter the activities of the notorious slavers, Theodore Canot and Pedro Blanco. A few of us may have learned that Muslim traders in the 1700s converted the majority of the people in Cape Mount to Islam. We may also have learned that Africans taken off slave ships were settled in the Tallah area, and later there was an influx of West Indian migrants into Robertsport.

In many ways, this is the limited history of Cape Mount that that we brought into adulthood. My family moved away from Robertsport after I completed the first grade, and my memory of growing up in Robertsport is very sparse, but my wife Sando tells me that when she was growing “Founders’ Day” was celebrated annually around Pioneers Monument in uptown, commemorating the arrival of the people from the United States.

In my view while this was an appropriate celebration, however, it was a very partial celebration, a very limited commemoration, one that did not take into account the entire kaleidoscope of the people of Cabo de Monte.

Of course, it does not require extensive research in the great libraries of the world to know that people lived in Cape Mount at the time of the arrival of the adventurous Pedro de Sintra arrived in 1461, and certainly before the arrival of the American pioneers. According to history, one of the instructions that the King of Portugal had given de Sintra was that he was to bring back someone from the areas in which he landed. Historians have documented that perhaps the first Liberian forcibly taken to Europe by de Sintra was probably a Vai man. Interestingly, it is documented that this Vai man encountered a woman in Portugal, a slave, who spoke his language. In 1462, the King permitted the unnamed Vai man to return to his homeland with gifts.

The Portuguese influence in this area was so entrenched that later Dutch and English navigators were amazed that Portuguese was a prominent local language among the Vais. Linguists have indicated that several words in the Vai language have linguistic correlations with the Portuguese. Despite the delight with which we say it, it is highly unlikely that “gbassa jamba” is an original derivative of the Vai language, and more than likely comes from the Portuguese.

One historian has concluded that many of the indigenous peoples of Liberia migrated from the north and east of the region between the 12th and 16th centuries A.D. It has been indisputably settled that the people with the longest documented history of living in what is now Cape Mount are the Golas.

According to Momolu Massaquoi, in an article published in an Oxford University Journal in 1910, the original inhabitants of this area were the Golas, whose territory stretched from Sherbro (in present-day Sierra Leone) to the St. Paul River (or the Dulu River as the Golas called it). He described the original Golas as salt-makers and fishermen.

Massaquoi reported that the Vais are members of Mani or Mandingo people – who occupied the great flatland from Tuba to Musaru, part of the great Mali Empire, in what is present-day Senegal and Mali. He described the Vais in their original homeland as a “tall, black, handsome and enterprising race of people – a people with knowledge of agriculture, weaving cotton, raising cattle, and working in iron and gold.”

Historians report that the Vais were forced to migrate when the Malian empire collapsed. They elected to migrate to the coastal region. According to Massaquoi, one of the leaders of the migrating Vais was a distinguished prince named Kamara. During the course of the journey, and when the caravan reached a place in the dense forests, in what is now apparently Konno, Sierra Leone, many of the travelers indicated that they were tired, and perhaps weary from the long journey. It was decided that some of them would wait at this point, while others would continue the journey to the sea. Prince Kamara is reported to have said “wait for me while I go bravely.”

Massaquoi points out that this decision resulted into distinguished branches of the original people: those who waited, the Konnos, and those who were brave enough to continue the journey, the Vais. As proof of the validity of this story, Massaquoi pointed out that in the Mandingo, Konno and Vai languages, the word “konno” means “wait” and “vai” or “fai” means “brave.”

According to Massaquoi, Kamara and his followers reached the sea, and on arrival, the chanting and shouting by the people praising their leader in their language, saying “truly thou art a ruler,” eventually became the word “Massaquoi.” From this, the ruling family of the northern part of the Vai country, known as the Gallinas, which was eventually ceded by threat of force by Liberia to the British, came into being. Other great leaders who also reached the sea , including the place called “Wakolor” became the ancestors of such families as the Sambolas, the Fahnbullehs, the Golafales, the Kiazolus, the Kiatamba, the Kiahons, the Zobombos, and the Jaleibas, and other families of “equal historical importance.” As we all know, each of these families represent a distinguished clan that exist today.

Massaquoi pointed out that The present-day Vai people are “an amalgamation of the Mani aliens with the indigenous Gola inhabitants.”

My fellow Cape Mountainians, the entirety of the history of all the founders of Cape Mount must be preserved, commemorated and celebrated. In this light, NACA should consider a project in the near future to establish a public library and information center in Cape Mount, perhaps in Robertsport, where the fullness of our Founders’ history can be accessible to the students of the county.