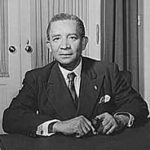 Liberia’s eighteenth president was born on January 5, 1882 in Brewerville, Liberia to Ernest James Barclay and Isabel Williams. Ernest Barclay had immigrated to Liberia as a child, from Barbados. Edwin Barclay attended Liberia College, and wrote THE LONE STAR FOREVER at nineteen. While serving as Secretary of State in the C. D. B. King administration, Liberia came under close international scrutiny over the Fernando Po forced labor shipments, which resulted in the resignation of President C. D. B. King and Vice President Yancy in 1930. Barclay served out the remainder of King’s term and was then elected in his own right in 1931. His astuteness and mastery of international relations helped save Liberia’s sovereignty and restore its credibility. Repealed the Ports of Entry Act which had restricted Kru trade, granted amnesty to Kru Coast rebels, and instituted reforms that ensured peace on the Kru Coast. Forged close ties with the US during World War II, with US military installations bringing infrastructural development (Robertsfield, the Freeport). Barclay died on November 6, 1955 in Monrovia.