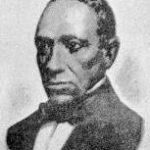 Roye, Edward James (3 Feb. 1815-28? Oct. 1871), fifth president of the Republic of Liberia, was born in Newark, Ohio, the son of John Roye, a wealthy merchant. His mother’s name is unknown. His father died in 1829, leaving some personal property and land to Roye. He went to public schools in Ohio, attended Oberlin College, and taught for a few years in Chillicothe. He also tried his hand as a sheep trader and shopkeeper in various parts of the Middle West. After his mother died in 1840, he was influenced by the emigration movement to escape American prejudice. He rejected Haiti and instead went to Liberia in 1846 when an independent republic was proclaimed, taking with him a stock of goods.

At the time of Roye’s arrival, the new republic faced a variety of ills. The dominant Americo-Liberians remained a small minority threatened by the local tribes; Liberia was in financial straits; the colony’s international position was in doubt; the colonists were involved in disputes with the Colonization Society; and various social divisions had developed. The more conservative element consisted mainly of light-skinned mulattoes, many of them adherents of the Colonization Society and some of them prominent traders and ship owners. The mulattoes were better educated than their darker-skinned neighbors, and some mulattoes had inherited property from their white fathers. They regarded themselves as a social elite entitled to the better jobs in commerce and government and defended their political interests by founding the True Liberian party, later known as the Republican party.

The darker-skinned settlers, who, in the main, made up the less affluent and lower class of immigrant population, were assigned land outside Monrovia, the main settlement, and they accused the Colonization Society’s white agents of discriminating on the mulattoes’ behalf. In the 1850s the dark-skinned elements formed the National True Whig party (NTWP), led by Roye, James S. Smith, and Edward Wilmot Blyden, in the upriver settlement of Clay Ashland. They called for the unification of all tribes and classes in the country and professed a more democratic outlook than the rival party.

The colonists faced all manner of difficulties: lack of capital, markets, and military resources; a difficult climate and soil; and tropical diseases for which no remedy was known. From the beginning they fought numerous wars with tribes of the coast and the hinterland. European colonial powers also threatened the new republic.

Roye became a leading merchant and ship owner and challenged the mulatto mercantile monopoly. Becoming one of the wealthiest men in the republic, he started the first shipping line to fly the Liberian flag and had a distinguished public career. He was a journalist, a member of the house of representatives in Liberia, and a government official in many capacities, including chief justice from 1865 to 1868, before being elected president in 1870 on his third attempt. A leader of the True Whigs, Roye was the first pure-blooded Negro elected to the presidency. According to Blyden, Roye had married “a pure Negro woman” from the United States, and she was the first woman who was not a mulatto to live in the presidential mansion.

With Roye’s election, lower-class and darker-skinned Americo-Liberians and Congoes, freed slaves from ships captured by the American African Squadron, gained power at the expense of the light-skinned, upper-class Monrovian traders, and Roye was the major architect of the political change that propelled the government into economic development. He had become acquainted with Blyden, “the brilliant and controversial West Indian born Liberian” who spent “his entire life championing his race” (Lynch), in 1850, and they both resented the dominance of light-skinned Americo-Liberians in the country’s government and mercantile life. With Blyden’s help, Roye set forth a program of development for Liberia that called for a national banking system, education of the indigenous people, building of railroads to open the interior, incorporation of the native peoples contiguous to Liberia, and the formation of an alliance with distant interior tribes.

Roye’s predecessor, James S. Payne, had seized the British ship Elizabeth, had been involved in border disputes with Sierra Leone, and was forced to pay an indemnity to Britain. After his election, Roye faced the problems of acquiring a loan to pay off the indemnity and settling the border disputes. He went to England in 1870 to request a loan of $500,000 from a London banking firm, offering future customs receipts as security. Consul General David Chinery, Speaker of the House of Representatives William S. Anderson, and Secretary of the Interior Hiliary Johnson carried out the negotiations. The terms were onerous–$150,000 discount, 7 percent interest, and repayment in fifteen years–and Liberia only received about $90,000 from the loan. Roye sanctioned the terms of the loan but failed to win the border dispute with Sierra Leone, a British colony. His mulatto Republican party opponents claimed he profited from the loan and gave away land.

Roye’s troubles increased dangerously when he tried to extend his presidential term from two to four years. In 1869 the Republicans had maneuvered to keep Payne in office by amending the constitution to allow an additional two-year term. In 1870 Roye won a vote in the Liberian House to amend the constitution to allow for a four-year term, but the Republicans in the Liberian Senate refused to accept the amendment. In May 1871 a referendum was held, but the legislature ignored the electoral vote and, without a two-thirds majority, declared the constitution not amended. Angered, Roye in October 1871 issued a proclamation declaring the constitution amended on the basis of the 1869 vote and the presidential term extended to four years. A crisis developed when the Republicans claimed the proclamation was unconstitutional and nominated former president J. J. Roberts to take over when Roye’s term ended. Believing he had a four-year term, Roye forbade the holding of the election.

Fighting broke out in Monrovia on 21 October 1871. A mulatto-led mob attacked Roye’s house and imprisoned him and the other True Whig party leaders. Roye was deposed on 26 October 1871, then he escaped from prison, only to be recaptured. Some accounts were that Roye, carrying a portion of the loan money, tried to escape in a boat and was drowned when the boat capsized. Blyden later claimed a mulatto shot Roye while he was waiting for the boat. Roye’s wife stated that, after his attempted escape, Roye was captured, beaten, then dragged through the streets and left to die in prison in Monrovia, the date unknown. It is unlikely that Roye had any of the loan money on him when he escaped. He was reportedly the richest man in Liberia, and most of his money was in British banks. He could have lived comfortably, had he escaped. Any money he carried on his person during the escape attempt, therefore, would probably have been his own cash.

Vice President J. S. Smith did not complete Roye’s term. Instead, a junta that had helped stage the coup took over. The legislature proclaimed Roberts president in December 1871, and he served until 1875. He was succeeded by Payne, who served until 1877, when once again the True Whig party won the presidency. When Britain took over the customs offices (until 1912) to collect the loan, Liberia lost some of its legitimacy, and Roye was unjustly blamed for the loan and the political trouble. In fact, the crisis was the work of the light-skinned elite who did not want to share power with black-skinned Americo-Liberians.

Despite Roye’s failings, his short administration marked a watershed. Although he was deposed, he had encouraged dark-skinned people to gain a share of government and to challenge the light-skinned politicians. He introduced the politics of patronage to the dark-skinned Americo-Liberians and the Congoes, and when the True Whig party returned to power in 1877, it remained in control until 1980. Patronage was thereafter extended to all Americo-Liberians, but the indigenous people continued to be excluded except for educating selected youths from the interior. Finally in 1980 the sons and daughters of the original settlers were overthrown.

Permission is granted to make and distribute verbatim copies of the American National Biography of the Day and Sample Biographies provided that the following statement is preserved on all copies: From American National Biography, published by Oxford University Press, Inc., copyright 2000 American Council of Learned Societies. Further information is available at http://www.anb.org/ American National Biography articles may not be published commercially (in print or electronic form), edited, reproduced or otherwise altered without the written permission of Oxford University Press which acts as an agent in these matters for the copyright holder, the American Council of Learned Societies. Contact: Permissions Department, Oxford University Press, 198 Madison Avenue, New York, NY 10016; fax: 212-726-6444.