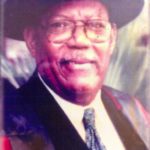 The funeral mass of Dr. Walter Lysandas Brumskine, Liberia’s only urologist, was held yesterday at Our Lady of Lebanon Catholic Church at Capitol Hill, Monrovia. In his eulogy to his fallen uncle, Counselor Charles W. Brumskine, now head of the Brumskine family, said “So many of God’s people could not afford the cost of Dr. Brumskine’s medical services, but he cared for them.

Cllr. Brumskine recalled that his uncle was a very jovial doctor, always joking with his patients. “We don’t know if it was your jokes or your medicine that made them well,” he stated. He walked mourners through a series of conversations that his uncle could be having with an Angel as the two reflected on Brumskine’s life on Earth. The Angel,Cllr. Brumskine said, would commend the doctor on a life well lived in service to God, country and humanity.

During the funeral Mass, the government of Liberia, former patients, students, the clergy and Brumskines family recalled his passion for medicine, his love for life, how he charmed with his jokes his patients and all who came in contact with him. A recurrent theme in the tributes was his love of life and his firm belief that one of his callings was to make people laugh, using all the facial muscles that God gave them.

Brumskine’s daughter, Dr. Euphemia Brumskine-Borrowes, said her father was God’s greatest gift to her family and thanked the Almighty for giving him to them for 84 years. Rev. Monsignor Robert Tikpor recalled fond memories of Dr. Brumskine at St. Peter Claver Junior High School. Tikpor was one of the older boys assigned to care for young Brumskine in the late 1940s. The two shared a friendship that lasted a lifetime. When Tikpor decided to join the Catholic Priesthood, Brumskine teased him. “Why you want to join that thing? You mean you’re leaving all these fine, fine girls here,’’ Brumskine told Tikpor.

A native son of Grand Bassa County, Dr. Walter Lysandas Brumskine was the fifth of seven children, six of whom predeceased him. He began his education at the St. Peter Claver Junior High School in Buchanan and later matriculated to St. Patrick’s High School in Monrovia, where he graduated the second of his class in 1952.

He was raised in the Methodist Church (son Methodist pastor), but the Catholic education influenced his life so much that he converted to the faith and remained a devout Catholic until his death. Growing up, Dr. Burmskine dreamed of becoming a doctor. After high school, he enrolled at the University of Liberia where he graduated with a Bachelor’s degree in biology. Brumskine’s hard work and excellent grades earned him a scholarship to pursue his medical studies at the Valencia Medical School in Spain.

One of his special attributes was that he became Liberia’s first urologist, and for many years remained the only specialist who provided medical and surgical care to people facing problems in the urinary tract system. During his professional life, Dr. Brumskine regularly participated in Annual General Meetings of the West African College of Surgeons; British Urological Association, the Royal College of Surgeons. He authored several medical and professional articles, including “Incidence of Schistosomaisis in Liberian Children and “Squamous Cell Carcinoma in a Five-Year-Old Liberian Male.” Dr. Brumskine remdered voluntary service as Observer Doctor to the Liberian Daily Observer newspaper.

In recognition of his outstanding services to the government and people of Liberia and humanity in general, through his practice of medicine, Dr. Brumskine received many state decorations, including Knight Grand Commander of the Most Venerable Order of Knighthood of the Pioneers.