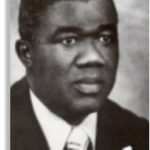 The late Dr. Moses K. Weefur, Sr. was born on April 3, 1923 to the union of Mr. Tieh Gbei Kronyanh and Mrs. Gbei Nimine Wiedi. He began his elementary education in the United Methodist Grammar School in the City of Grand Cess, the place of his birth. His father’s friend, the late Hon. Sowie Nebo, sent young Moses along with other young boys to the Bible Industrial Academy (BIA) in Grand Bassa County for further education from 1932 to 1940. It was there that Moses began to show signs of academic promise, which led to further schooling and training at the College of West Africa in Monrovia, Liberia. He graduated from CWA in 1944 along with the late Dr. Nehemiah Cooper, the late Rev. Peter George, Henry Cassell, and Dr. Archibald Johnson among others. He would later become a faculty member of the CWA.

The late Dr. Moses Weefur began his public career as a school teacher. He taught at CWA and the Wilson Afternoon School simultaneously from 1945 – 1950. In 1951 he became Secretary to the late Nathaniel V. Massaquoi then Secretary of UNESCO International Program in Liberia. He later became Principal of the Cape Palmas High School from 1954 – 1956. Because the effective and efficient manner in which he administered the affairs of the Cape Palmas High School, President William V. S. Tubman was pleased to appoint him as the first Liberian Principal of the Booker Washington Institute (BWI) in Kakata, Liberia in 1957. On campus, Dr. Weefur was popularly known as “Bo-wee” or “Old Pops”. He held this position until 1972. He was loved by students and faculty alike. Dr. Weefur went on to become General Administrator of the JFK Medical Center; Chairman of the Council of Monrovia Consolidated School System; and Member of the House of Representatives for Gbi Territory (now an integral part of MarGibi County). His was decorated by the Liberian Government with the distinctions of Knight Commander of the Humane order of African Redemption and Grand Band, Order of the Star of Africa. He was also decorated by the Government of the Federal Republic of Germany.