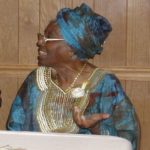 Mary Antoinette Hope Grimes was born in Monrovia, Liberia on October 27, 1926 to the union of Louis Arthur and Victoria Elizabeth Jellemoh Grimes. She was the only girl of five children. Her father was a previous Attorney General, Secretary of State, and finally Chief Justice of the Supreme Court of Liberia. Mary Antoinette fulfilled a dream by writing the story of her mother’s life in the book, “Jellemoh.”

Mary Antoinette was a woman of faith, a woman of prayer, a woman of integrity, and a woman of “the Book,” the Holy Bible. Her faith enabled her to survive widowhood at 36, raising 6 children while working on her Ph.D. in her late 30’s, loss of her only daughter at age 41, politically-motivated imprisonment at age 59, being a caregiver to her husband after he was struck with Alzheimer’s disease in her late 60’s through early 70’s, and battles with cancer in her 70’s. She was a lifelong learner, and personally typed the manuscript for “Jellemoh” on her computer. She completed the manuscript, but passed away before the book was published. Reflecting on her life of 77 ½ years, she would have said as she did say on many occasions, “Sei gbi kamba wa ta mu!” – All thanks belong to God!