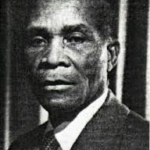 Didwho Twe (Tweh) was born in Monrovia on April 14, 1879. His early education was under the tutelage of American Methodist Missionary Mary Sharpe and Rev. Dr. Paulus Moort, Rector of Trinity Episcopal Church. Twe then attended Patsy Barclay Private School and later, Cuttington College and Divinity School. American friends, including Vermont Congressman William W. Grout, assisted in arranging further studies for the promising and brilliant student in the United States and in 1894, Twe left Monrovia for St. Johnsbury Academy in Vermont. He studied at Cushing Academy in Ashburnham, Massachusetts, Rhode Island State College in Kingston, at Columbia University, and at Harvard.

He supported himself during his studies by working as a valet for a wealthy banker, and for the famous author Mark Twain. (Samuel Langhorne Clements) Twe and Mark Twain maintained a friendship long after his return to Liberia and exchanged lengthy and intimate correspondence, in which Mark Twain often expressed his views on the racial issues of the United States. Twe also contributed articles to the AMERICAN JOURNAL OF PSYCHOLOGY, and the BOSTON TRANSCRIPT.

Didhwo Twe returned home in 1910 and in 1912 he was appointed District Commissioner by President Daniel E. Howard. He served on the Anglo-Liberian Boundary Commission and was later elected to the House of Representatives from Montserrado County. He was a big game hunter and prospector, and was one of the receipients of Firestone’s gifts of 5000 rubber plants. It was while serving in the House of Representatives that he came into the knowledge of forced labor exportations to the Spanish plantations. He twice drafted a bill that would prohibit such practices, but the first one was killed in committee, the second one in 1929 ending up in a tie vote on the House Floor. The President Pro Temp, Senator Vampelt cast the deciding vote, killing the bill.

The power behind the lucrative forced labor exports was exhibited when Twe was charged with sedition and expelled from the House in 1929. Hurt, disappointed, and resolute, he traveled through the country gathering evidence and compiling documents, and at some point began to work closely with Thomas Faulkner, the former Mayor of Monrovia who was also adamantly opposed to the practice of forced labor and like Twe, had fallen out of favor with the Monrovia political establishment. The evidence Twe collected was presented by Faulkner to the League of Nations Secretary General Sir Eric Drummond in Geneva in December 1929.

His life in danger, Twe went underground but somehow managed to establish and maintain contact with League Commissioner Charles S. Johnson while the Commission was investigating the charges of forced labor, encouraging frightened chiefs and their people to testify before the Commission. After President King and Vice President Yancy were forced to resign, President Edwin Barclay’s efforts to contain the crisis led him to crack down on dissidents. In November 1932, Twe fled to Sierra Leone, from where he advocated armed revolution in Liberia and a “Kru Republic.” In pursuit of this objective, he appealed to friends abroad for help in obtaining arms, writing to an English friend, Florence Morgan and to Charles S. Johnson, with whom he remained in contact after Johnson and the Commission left Liberia.

Twe returned to Monrovia unexpectedly in 1936, and some Barclay Administration officials attempted to arrest him. Barclay however, decided to allow him to remain free on the condition that he refrain from political activities. In the early 1950s, he challenged President Tubman first under the banner of the United Peoples Party and later the Reformation Party, aiming at complete sociopolitical reform. Tubman accused him of tribalism and treason, of being “a consummate liar, a senile visionary, a sophisticated bigot, and an uncompromising egotist.” This bitter rivalry between the two men apparently had other than political underpinnings. Reportedly the previously close friends were enamored of the same woman. Twe was married to Tubman’s former wife.

Not surprisingly, Twe eventually had to flee Tubman’s security network, and he again sought refuge in Sierra Leone where he remained until he was pardoned by Tubman in 1960. Didhwo Twe died on March 19, 1961 in Monrovia.