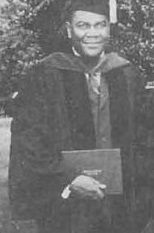 Charles D. Sherman was born in Robertsport, Grand Cape Mount on September 27, 1918. Educated at the University of Pennsylvania and American University, he served as economic advisor to the Liberian government and on the joint Liberian -United States Commission for Economic Development, and was appointed Secretary of the Treasury in 1960, serving in that capacity until 1967, presumably when he was elected Senator from Grand Cape Mount.

Sherman was president of the Liberia YMCA and head of the YMCA World Alliance Council in the 1960s. Still Cape Mount Senator and True Whig Party official at the time of the 1980 coup, he was detained for several months by the military government. He devoted his last years to the Episcopal Church of Liberia, and to writing his memoirs. The book was completed but not published. Charles D. Sherman died in Monrovia in 1986.

From HISTORICAL DICTIONARY OF LIBERIA, Dunn, Beyan and Burrowes