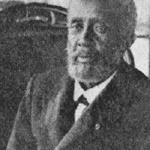 Old Man Barclay, as the 14th President was affectionately called, was born in Bridgetown, Barbados on July 31, 1854, to Anthony Barclay and Sara Ann Bourne Barclay. He immigrated with his parents and ten siblings to Liberia in 1865 when he was eleven years old. First schooled by his older sister Antoinette Hope Barclay, he attended the Liberia College Preparatory Department, and the Collegiate Department of Liberia College, from which he graduated with a B.A. in 1873. Writing in the American Colonization Society periodical LIBERIA in February 1894, Alexander Crummell had effusive praise for Arthur Barclay’s intellectual abilities and the Barclay gene pool:

“…one of the youngest members of a more than ordinary family, for no one could see and converse with the parents and with their sons and daughters, eight in all, without being struck with both their character and their intelligence…They have risen, without any exceptions, to high positions in church and state, as teachers, merchants, lay readers, vestrymen, and statesmen…Mr. Barclay received his education as a boy in the schools of Monrovia; thence he passed to Liberia College, holding a high position in his classes in both the languages and mathematics. Since his graduation his acquirements, coupled with his manifest uprightness, have made him a necessary factor in the public affairs of the young nation, and he has held several political positions under the government, always acquitting himself with intelligence and honor.”

Charles S. Johnson wrote of the fourteenth President in the 1930s: “The Old Man belied his eighty years with his brisk step, firm bearing, active erudition and incredibly incisive wit…He probably had read every book that came into Liberia and had a retentive and continous memory. The laws of Liberia, its international problems, the native question, he knew in detail, and discoursed with familiar knowledge on the activities of the various African societies, archaeology, legal prodedure in England and America, Aviation, President Hoover’s government by commissions…”

Arthur Barclay reportedly sold salt on the streets of Monrovia, before joining the staff of his Alma Mater, becoming Principal of the Preparatory department and then Professor of mathematics and languages. Between semesters, he worked as Chief Clerk at the House of Representatives, while studying law. Barclay’s life-long relationship with Liberia College included tenures as Acting President, and member of the Board of Trustees. He worked as private secretary to President Joseph Jenkins Roberts from 1874 to 1877.

Admitted to the Montserrado County Bar as an attorney in 1877, he became a Counselor-at-law three years later, and judge of the Court of Quarterly Sessions and Common Pleas in 1883. Barclay also held the position of subtreasurer of Montserrado County, (1885) and was elevated to cabinet rank as Postmaster General in 1892, after which he served as Secretary of State under President Joseph J. Cheeseman. In 1896, he was appointed Secretary of the Treasury, a position he held until his election to the presidency in 1903, taking office in January 1904. In the interim, he served on several international missions, including the 1893 World’s Fair in Chicago, to the 1871 loan amortization talks in 1897, and on diplomatic missions to France and England in 1901.

The main challenge facing the Arthur Barclay administration was a severe economic crisis, precipitated by overwhelming debt obligations and an empty treasury. The once vibrant merchant marine trade in coffee, palm oil, sugarcane and other commodities had peaked in the period from the late 1840s to the 1860s when it began a rapid decline due to internal and external factors. By the 1870s, the country was almost bankrupt, its independence seemingly mortgaged to European financial houses. The 1864 Ports of Entry Act, aimed at controlling trade between the Kru and the Europeans, was also seen by President Barclay as detrimental to the nation’s economy. His efforts to repeal that law would be met with strong opposition from some quarters, mainly Sinoe. Repercussions from the disastrous 1871 EJ Roye loan from Britain were still being felt as, in order to make payments, the country got further and further into debt. For twenty-five years the country had haggled with its creditors over the legality of the loan transaction, achieving only a further deterioration in its credit status, as there was no escaping this obligation. A hundred thousand dollars of the loan amount had been spent almost before President Roye returned from London in 1871. In 1898, it was Arthur Barclay as Secretary of the Treasury, that had finally succeeded in reaching a settlement with the British creditors, adjusting the loan principal, in default for twenty years, to $375,000, down from 1.5 million.

In addition to its financial woes, internal unrest grew as the economic hardship crippled the government’s ability to maintain control over troubled portions of its territory, mainly the southeastern coastal region. As the country struggled to find ways to modernize its agriculture-dependent economy, reduce the costs of its imports and service its debts, new sources of revenue were desperately sought. After experimenting with complicated currency regulations, swapping procurement orders for custom revenues (which only enriched the foreign merchants, further devalued the paper currency and created more entanglements), imposing a hut tax on the unassimilated indigenous population (which resulted in a serious Grebo-Kru uprising in 1910), the national debt stood at $800,000 in 1904, including the $480,000 adjusted 1871 loan principal plus interest. Desperation caused Barclay’s government to enter into another disastrous half million dollar loan arrangement with Sir Harry Johnston’s shady Liberian Development Company, over which Liberia nearly lost her sovereignty when the British head of the Frontier Force (a condition of the loan), Major MacKay Cadell, engineered a coup which almost succeeded.

President Barclay finally turned to the United States for help and President Howard Taft proved surprisingly sympathetic. He sent over a three-man delegation which recommended an American loan that alleviated the situation somewhat, but Liberia would remain entangled in debt and financial crises until after World War II. Barclay had more success tackling the country’s domestic troubles. Peace returned to the Cape Palmas area after the USS Birmingham forced an end to hostilities and assisted the government in reaching a negotiated settlement with the Grebo leadership. The Barclay Administration began to seek out ways to increase unassimilated participation and incorporation into the body politic. The President invited the chiefs to his 1904 inauguration and called the first council of chiefs that same year. Barclay’s policy of “Direct Cooperation” with traditional indigenous authority was continued under succeeding presidents.

He used the findings of Benjamin J. K. Anderson’s 1888 explorations to organize the interior for administrative purposes and applied the term Liberian to the unassimilated population for the first time. “What we need,” Barclay said in his inaugural address of 1904, “is wider and deeper culture, and more intimate intercourse with our interior brethren.” Barclay sought greater consultation with the chiefs of the interior and involved himself in the appointments of Paramount and Clan chiefs. The vision of a genuine African state, envisioned and articulated by Edward Wilmot Blyden, was beginning to take shape. Blyden and Barclay shared a deep respect for and understanding of indigenous culture and society. Blyden spoke several indigenous languages while Barclay possessed encyclopedic knowledge of local ethnography and anthropology. The fourteenth president was also in later years a supporter of Marcus Garvey, and often in attendance at UNIA meetings in Monrovia. Barclay also succeeded in finally settling the boundary disputes with the French and British governments, heading a mission in 1907 to Paris and London.

On leaving the presidency in 1912, he served at different times as Acting Secretary of State, Treasury, War, and The Interior. His most important and most challenging assignment in the service of his country came when the ex-President was eighty years old and in semi-retirement on the legal staff of the Firestone Company. The CDB King government nominated him in 1929 as the country’s representative on the League of Nations Commission of Inquiry Into The Existence of Slavery And Forced Labor In The Republic of Liberia.
Charles S. Johnson wrote:

“As the sole ex-public official whose record inspired international confidence, he was expected to examine impartially those charges against the Republic which he well knew were in very large measure true; he was expected through some miracle of his wisdom to defend the integrity of the state before the world.”

The Chief US Diplomat in Monrovia, Clifton Wharton described the ex-President in a memo to his State Department superiors as:

“The confidential advisor of the present administration and in times of stress, the government invariably calls upon him…at present he is practicing law in Monrovia, Dean of the Liberian Bar, best known lawyer in the Republic, is attorney for the Firestone Plantations Company-great experience on commissions.”

Barclay, due to age, was not able to accompany the other members of the Commission on their investigatory trips into the interior, but he participated in hearings held in or close to Monrovia, and the deliberative proceedings after the hearings concluded. Cuthbert Christy represented England on the Commission. The United States Representative was Fisk University President Charles S. Johnson. In BITTER CANAAN: STORY OF THE NEGRO REPUBLIC, Johnson writes of Arthur Barclay’s role on the Commission, which initially was one of Defense Counsel, questioning procedure and reference:

“His first attitude was one of cheerful non-cooperation on the matter of seating the first witness. His argument on the first day of discussion of testimony was, ‘There is nothing before the Commission.’ Disposed to defend the name of President King and to construe any unfavorable reference to the administration as disloyalty, he raised objections to the definition of forced labor, maintaining that there would be no force so long as there was consent of the laborer, however secured.”

“It was evident that he knew the history and details of much that was discussed, but he offered no explanations except in defense. As the proceedings developed and he sensed the fervor and the persistence of the charges, he dropped his defense; still later he showed surprise at the consistency of the revelations made; and finally he shook his hoary head in disgust. On one of his final objections, that the chiefs and their people were bringing to the Commission matters which should have been carried to the appropriate departments of government, he was asked to assist a complaining citizen privately to get action on his grievance. Although it was a relatively small matter, Barclay discovered that it took four days merely to get a hearing for the man. He saw the man intimidated and the case bandied between departments with no ultimate effective action taken. What he, with all his power and prestige, could not do for a common citizen, it was clear to him that a common citizen could not do for himself. The stern logic of the situation eventually overcame his emotional loyalties. With the air of an attorney who has exhausted every reasonable defense, he signed the full report of the Commission without offering amendments. With characteristic courage and calm, Barclay faced the new future of Liberia.”