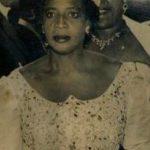 President Tubman’s third wife and First Lady of Liberia (1948-1971), Mrs. Tubman was born on Feb. 24, 1914 in Monrovia, to JAMES STANLEY PADMORE and MARY LOUISE BARCLAY PADMORE. She was raised by her aunt ELIZABETH BARCLAY SHERMAN after the death of her mother, and educated at Bromley Mission, and in Paris where she studied modeling and fashion.

As First Lady, “Aunt Nettie” established a miniature museum at the Mansion, with an interesting collection of presidential mementos from several administrations including her husband’s. She opened two businesses, COOCOO’S NEST Motel and Restaurant in Totota, and WILMETCO Coffee Plantation and Processing in Maryland County. Mrs. Tubman pioneered in the field of social services, launching the first national systemic program for orphans and disabled children at the SAMUEL GRIMES HOSPITAL in Kakata. She led Liberian women and the wives of foreign businessmen and diplomats in establishing the Antoinette Tubman Child Welfare Foundation, and the AT Child Welfare Center.

Turning to the field of mental health, Mrs. Tubman was instrumental in the founding of the CATHERINE MILLS PSYCHIATRIC TREATMENT And REHAB CENTER just outside Monrovia. Nettie Tubman was also chief Patron of the SARAH SIMPSON GEORGE HOME FOR INDIGENTS, and the SOCIAL SERVICES ASSOCIATION, a civil organization that raised funds for welfare institutions.

From HISTORICAL DICTIONARY OF LIBERIA, Dunn, Beyan and Burrowes.