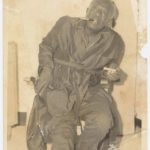 Anthony Dashward Wilson was born on April 2, 1898 in Harper, Maryland County and graduated from Cuttington College. Entering into public service, he occupied multiple bureaucratic positions before being elected to the national legislature. Following a period of time in the House of Representatives, he was elected to the Senate, in which he served until President Tubman appointed him to the Supreme Court on March 13, 1958.

In November 1968, Wilson was critically injured in an automobile accident; he was flown to the United Kingdom for medical treatment and spent more than half a year outside the country, only returning to the bench at the end of the following June. During his absence, Lawrence Mitchell served as the Chief Justice Ad Interim.

Dash Wilson died in 1970 and was buried in Monrovia.