In the collection of the Netherlands Photo-museum, that hosts the legacy of anthropologist/photographer Paul Julien, there are two Bassa manuscripts. They were sent to him by the Catholic Mission in Monrovia in 1949. We will post some of the manuscript pages in this album. (posted by AS)

4th paragraph in this letter (dated November 29th, 1949) from the Catholic Mission to Paul Julien in the Netherlands: 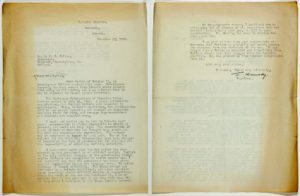 ‘I have never heard that the Vai script has been adopted by the government as an official script. English is the only official language of the government, though native dialects are recognised in native courts etc. I can certainly say that the government has never given special recognition to any one language here. No native language is taught officially. The Bassa Script was developed by a private individual, and never received to my knowledge either official mention or recognition. Since the death of the man who developed it, I am of opinion that it has gone out of use very much now. It is long since I have been in the Bassa country however.’ (AS)